“RCU Foundation is pleased to provide a $250,000 gift to the new Nature Center at Willow River State Park. This is a terrific project for Hudson, New Richmond, Somerset, Stillwater, and the area,” stated Doug Olson, RCU Foundation Vice-President. “The RCU Foundation’s purpose is to create a positive impact in the lives we touch and the communities we serve,” said Olson, “and the Paths to Discovery Campaign offered us a chance to make a difference in this community.”

The New Nature Center will have classrooms and indoor and outdoor education spaces to inspire young learners and adults. Along with the community rooms, exhibits and the classroom facilities will be flexible and expandable, making this an ideal facility to meet the needs of the community.

“This is a wonderful cornerstone-level gift from the RCU Foundation and I want to thank their leadership for making this important investment in our community,” stated John Collins, President of the Friends of Willow River & Kinnickinnic State Parks, Inc.

In recognition for the cornerstone-level gift, The New Nature Center will now be home to the RCU Community Room. 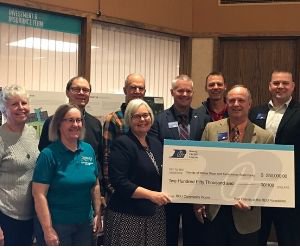 Serving more than 3,500 students each year, Willow River Nature Center builds a passion for education and hands-on experiences that promote a healthy respect and appreciation for the natural world. Says Judy Remington, Paths to Discovery Campaign Vice-Chair, “Education is the heart of our mission. A new and improved Willow River Nature Center will take education to a new level and benefit tens of thousands of students, seniors, and families in our community.”

Students at Royal’s elementary School $ense locations took part in our “All Student Challenge” to show off their money skills.